Posted on September 5, 2013 by Monica Hahn — Leave a comment

A colleague called me recently looking for some advice on quitting her job – I’ll call her “Movin’ On Mara.”  Mara has been frustrated for many months in an organization where no one is set up for success. They don’t have the resources – not just financial, but support from other departments – to do a good job. Mara has tried valiantly to offset the lack of support by working harder, but found it impossible to deliver at the high standard she sets for herself, and was simply burning out. Her manager understood the situation and was sympathetic, but had given up and counseled her to lower her expectations.  Mara had really already made the decision (a good one, in my opinion) to quit; the question was around when and how. It felt very stressful and overwhelming, so we broke it down into parts.

Do I dare do this now?  Did I mention that Mara doesn’t have another job. So her first question is, “Am I out of my mind to quit a decent job with a stable organization when I don’t have something else lined up?” As I often do with my coaching clients, we talked through the pros and cons. 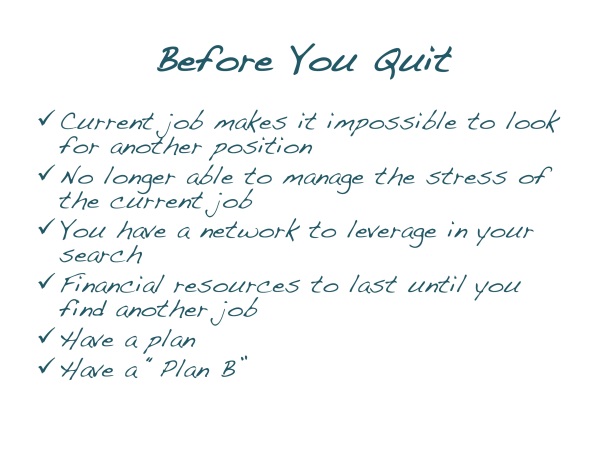 Mara was already past the first two points – the time demands of her current position made it impossible for her to dedicate any meaningful time to a job search, and she could no longer manage the stress effectively.  Because Mara has been thinking about this for awhile, she has already done a few smart things.

Bowing out gracefully – Satisfied that there was no time like the present, we talked about how she should resign. Mara has a good relationship with her manager, and wants to keep it that way. She doesn’t want to leave them in the lurch, but wants to move on with her career and life. She feels some duty to share feedback on why she’s leaving, in the interest of helping those left behind as well as personal integrity. So there are several variable to consider:

Mara is movin’ on – she quit her job on Friday.  Her boss was totally understanding and supportive.  Rather than the Friday 2 weeks hence end-date proposed, the manager asked her to stay through the end of the following week, and pointed out that it would give her the opportunity to attend a training session that would support a certification she’s working on. She’ll leave with wishes for success in finding her next opportunity, and promises to provide a glowing reference.

Time (and this blog) will tell whether this story ultimately has a happy ending. We don’t know what new adventures await my friend. But we do know that she is ready to tackle them with spirit and confidence, and has time to give the process the attention it deserves.